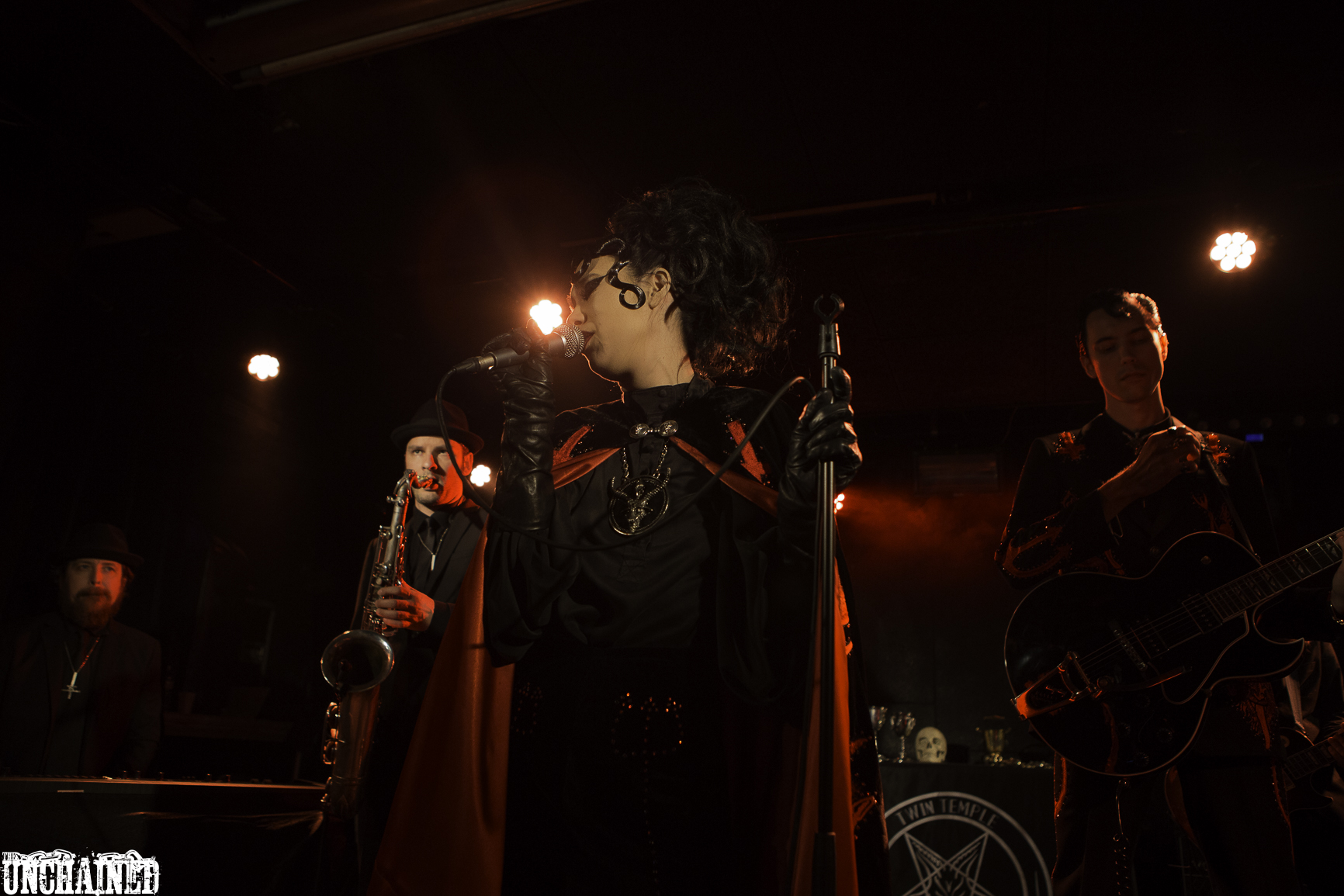 Waiting for Alexandra, I was discussing a bit with Zachary about bands, music, Los Angeles and Venice (Zachary is born in Venice), and about that strange guy on rollerblade and his guitar (everyone that been in Venice know him !).

It was at this moment that Alexandra enters, so the interview can start !

Alexandra : That all we’ll give you, the rest you have to figure it out for yourself !

Alexandra : I was classically trained on Violin as a little kid

Zachary : I was trained on the standard bass on orchestra for a few years
Alexandra : Once Basically I turned  like 12 or 13 and discovered Punk-Rock obviously I didn’t play to play Mozart anymore, so I got in the Punk and started writing music

Alexandra : Jazz.. well I always really like Jazz along, my dad played a lot of Jazz when I was growing up, and obviously I really love vocals and singing and Jazz vocalist, I feel they really push the technicality and the capability of the human voice, so I love Jazz for that. And I mean it’s just another one of those classical American Art perform ! 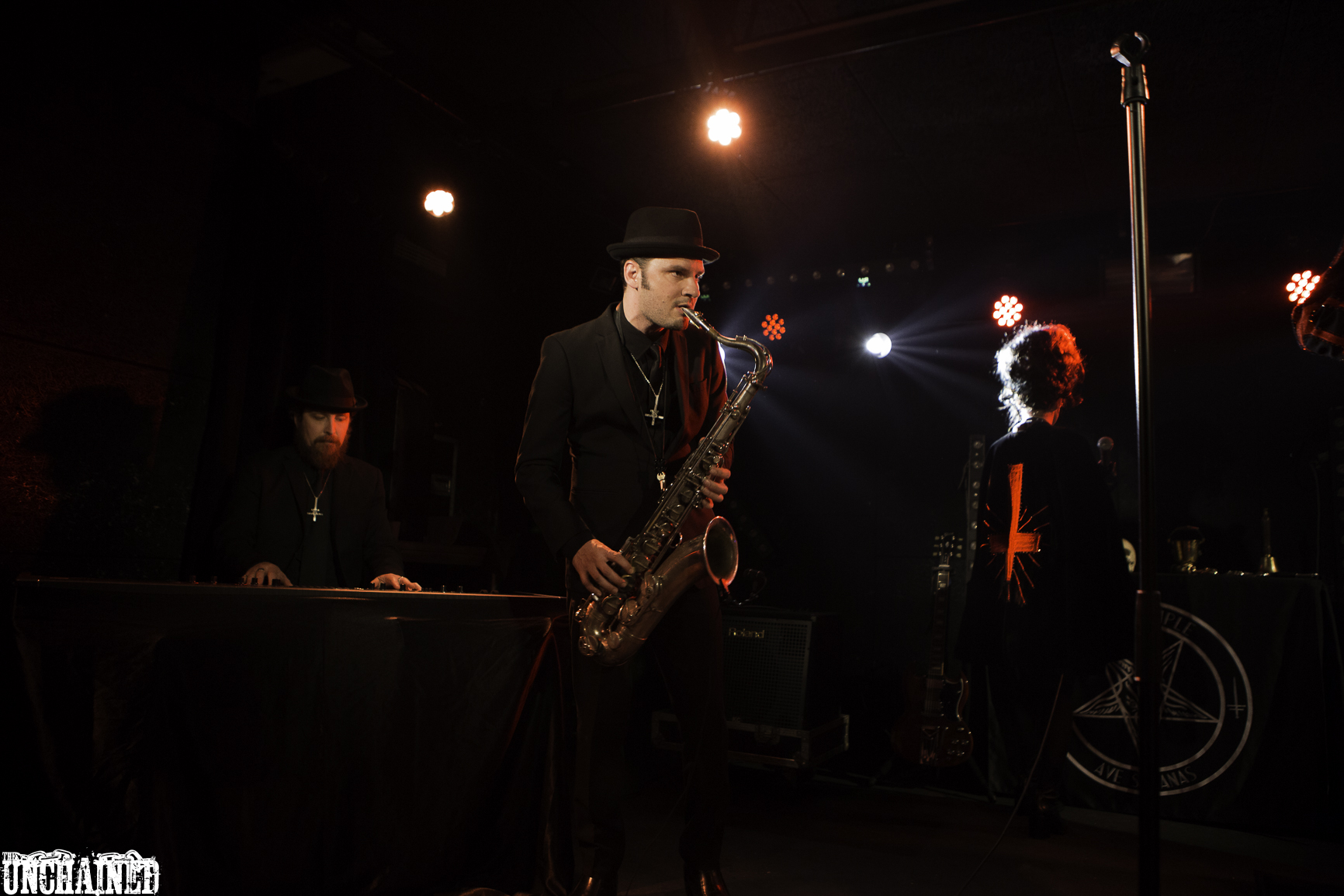 Zachary : I definitely think there’s a new-wave of punk now. When we were doing it, it was different
Alexandra : Different, I mean I was just like 17 when I move to L.A and the punk scene was a lot of backyard shows down South L.A like Camden, South Gate…
Zachary : Very DIY (nd : “Do It Yourself”)
Alexandra : Veeery, like : the cops are getting called on the show..!! (laughs)

Zachary : it was all influenced by the 70s punk movement like UK, east-coast scene, it was still relatively melodic.

Zachary : First show ever or with Twin Temple ?

Alexandra : First show ever we only had 4 songs, and they had an encore, so we played awkward songs…we didn’t have much set ! (laughs)
Zachary : It was not Twin Temple
Alexandra : Our first show with Twin Temple was like in a bar with 40 people
Zachary : It was a small place it was packed but it was tight, it was a little bar you know and we just kinda unveiled it…

Zachary : It was like the launch, the first public show, we’ve been working on it for a little while, so it was the unveil, it was a small but intimate gathering.
Alexandra : It was fun, and it just seems everytime we play a show they  were more people there
Zachary : It was crazy
Alexandra : We didn’t expect that, because that’s not really happened with our bands before 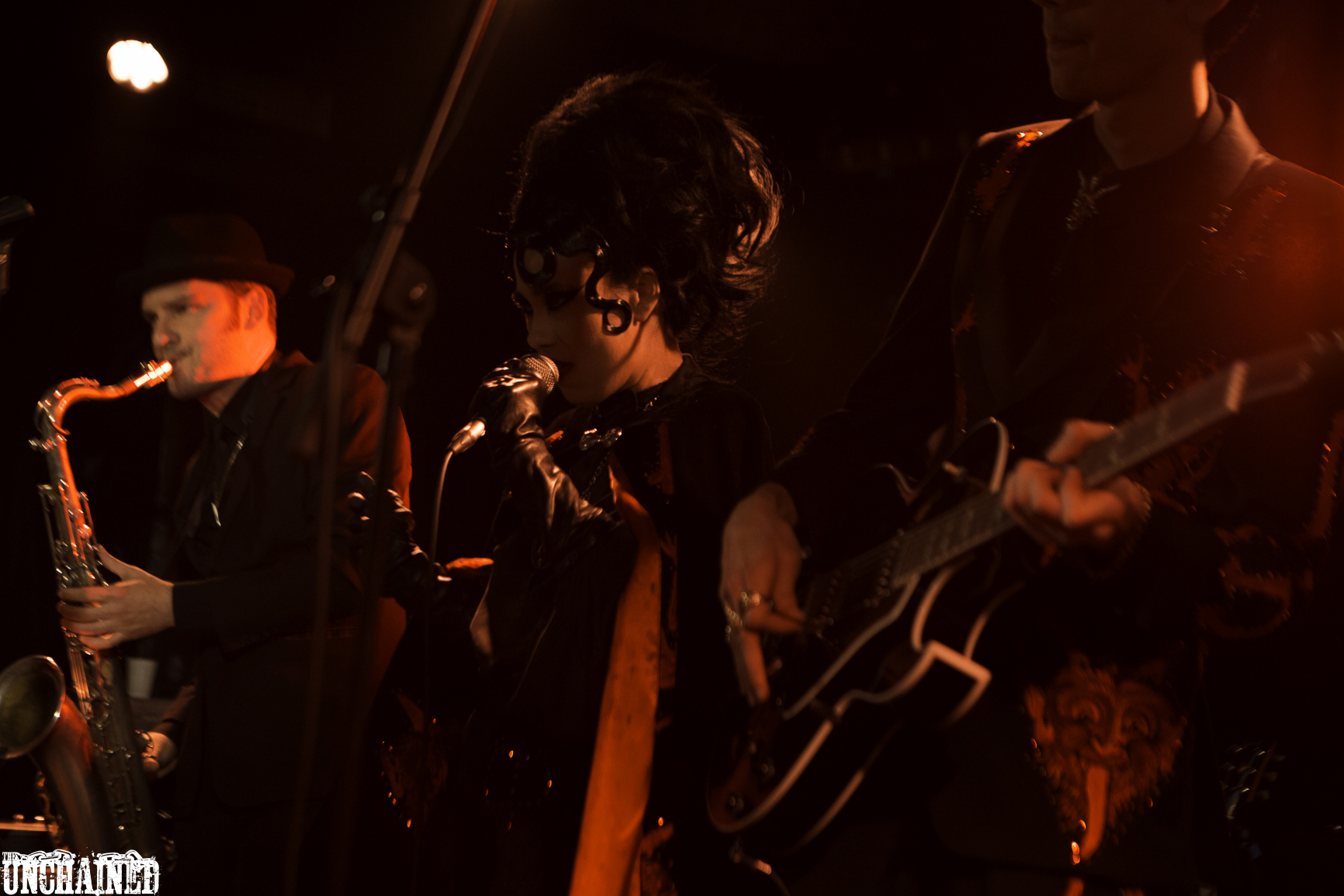 Alexandra : Well… originally instead of going to the art-school I maybe wanted to go to school to be the writer : poetry and creative writing has always been something that I’ve spent a lot of time doing, and using to express myself, I love poetry and reading…

Alexandra : I do love Edgar Allan Poe !! I like a lot of his like gothic literature for sure, but lyrics why is… I draw a lot of inspiration from basically a new play to keeps it real. We were just listening to after showing like some rare Loretta Lynn song the other day ; I really love Loretta Lynn’s Lyrics…
Zachary : …country-singer !…
Alexandra : …because  she’s got these great song about how she doesn’t want any more babies, and so she’s like getting on the pill… she’s like whiskey in a tea cup she packs like a punch and she’s very direct and says how it is, I find it very empowering, so I definitely listen to her lyrics a lot.

Zachary : Pretty large difference I feel like if someone identified as being gothic is more just like a look…
Alexandra : …love a certain kind of music… romantisation…macabre…dark
Zachary : Interesting in death, more death centric
Alexandra : Victorian
Zachary : whereas Satan is more a celebration of life and death
Alexandra : Well I goth I suppose you could say it’s too…
Zachary : like death positive
Alexandra : we could have a gothic scene for sure… we are already…
Zachary : They are not mutually exclusive they are just slightly different
Alexandra : They are like 2 separate circles

Alexandra : (laughs) let’s say blackened Whinehouse ! People definitely draw the comparison, I think she is amazing one of the best singer and songwriter and lyricist of our generation, I’m like “wow if you want to compare me to someone that great go for it !

Alexandra : I don’t believe in either !” (laughs)
Zachary : She is in an afterlife of her own making !

Alexandra : Honestly we will never have a band without a real drummer, because we love classic rock’n’roll !
Zachary : It’s gotta be organic
Alexandra : We listen to a lot of country and are inspired by a lot of country for sure, but we always evolve, never say never, we don’t know about the future, but we’ve been played a lot of rock’n’roll with guitars and live band and drummers for a decade now…
Zachary : We’ll always be rock’n’roll adjacent…
Alexandra : I don’t think we’ll ever straight too far from that classic sound that we love ! 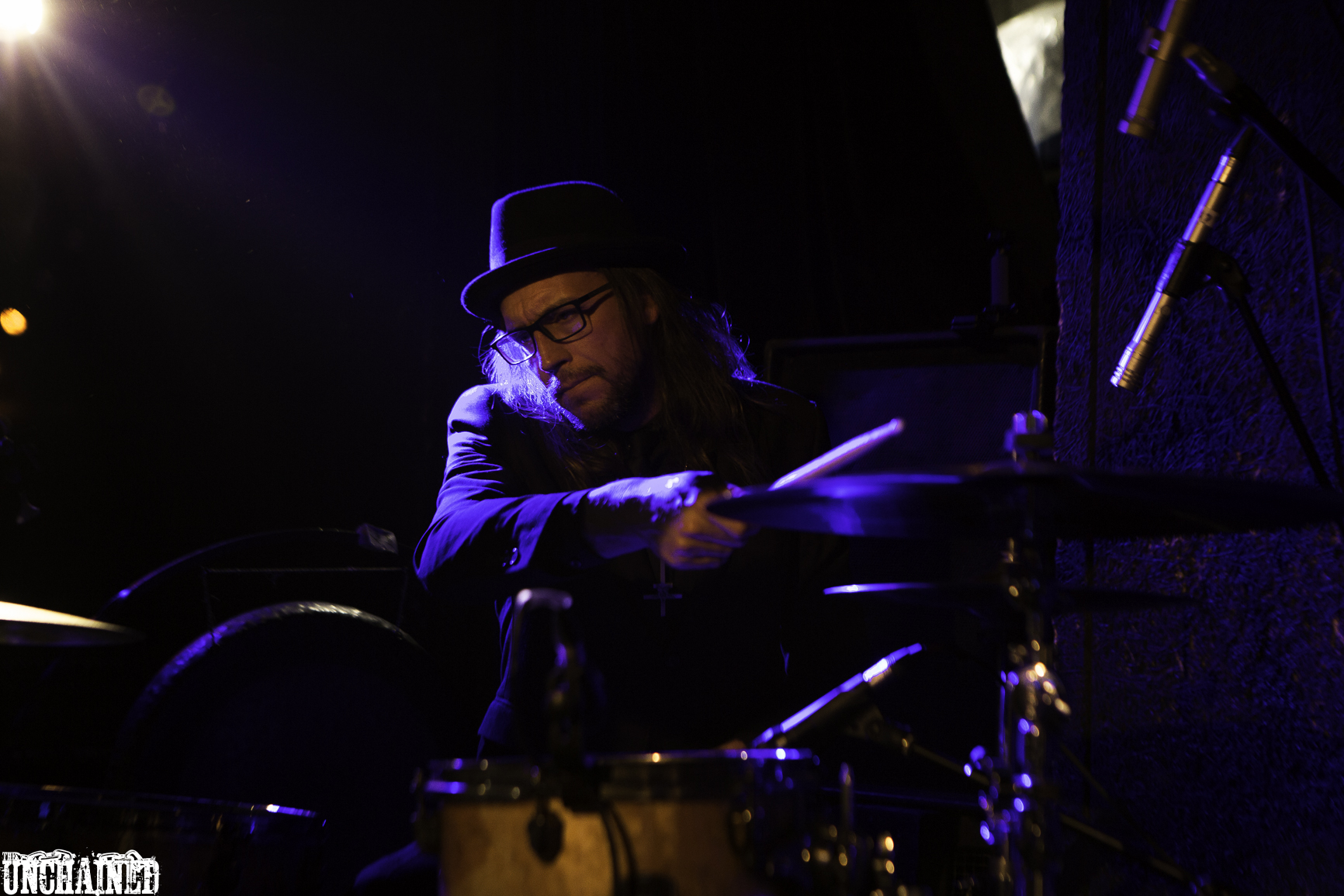 Alexandra : I think from Jehovah’ Witnesses constantly trying to convert us and giving us pamphlet, and obviously like prospecting is like NOT a part of Satanism at all, but we just sort of think it would be funny, and we made a few as jokes, and then people love them : “My god you sold these I have to buy some, I want to leave them in hotel bible ! I want to give it to Jehovah’s witnesses when they come to my door !” so we printed a bunch of them, and people love them. They are mean to be funny, but also kind of a mini-guide to what our ideology is. Cause a lot of people ask us about the same questions, we just need to give them a piece of paper to say : “No we don’t sacrifice virgins !”… Just take this, all the answer to your questions !! (laughs)

Zachary : Christopher Lee !!!
Alexandra : The cape was definitely inspired by Dracula ! We even have the redlining !
Zachary : The Hammer Films… it has a lot of great Dracula films ! 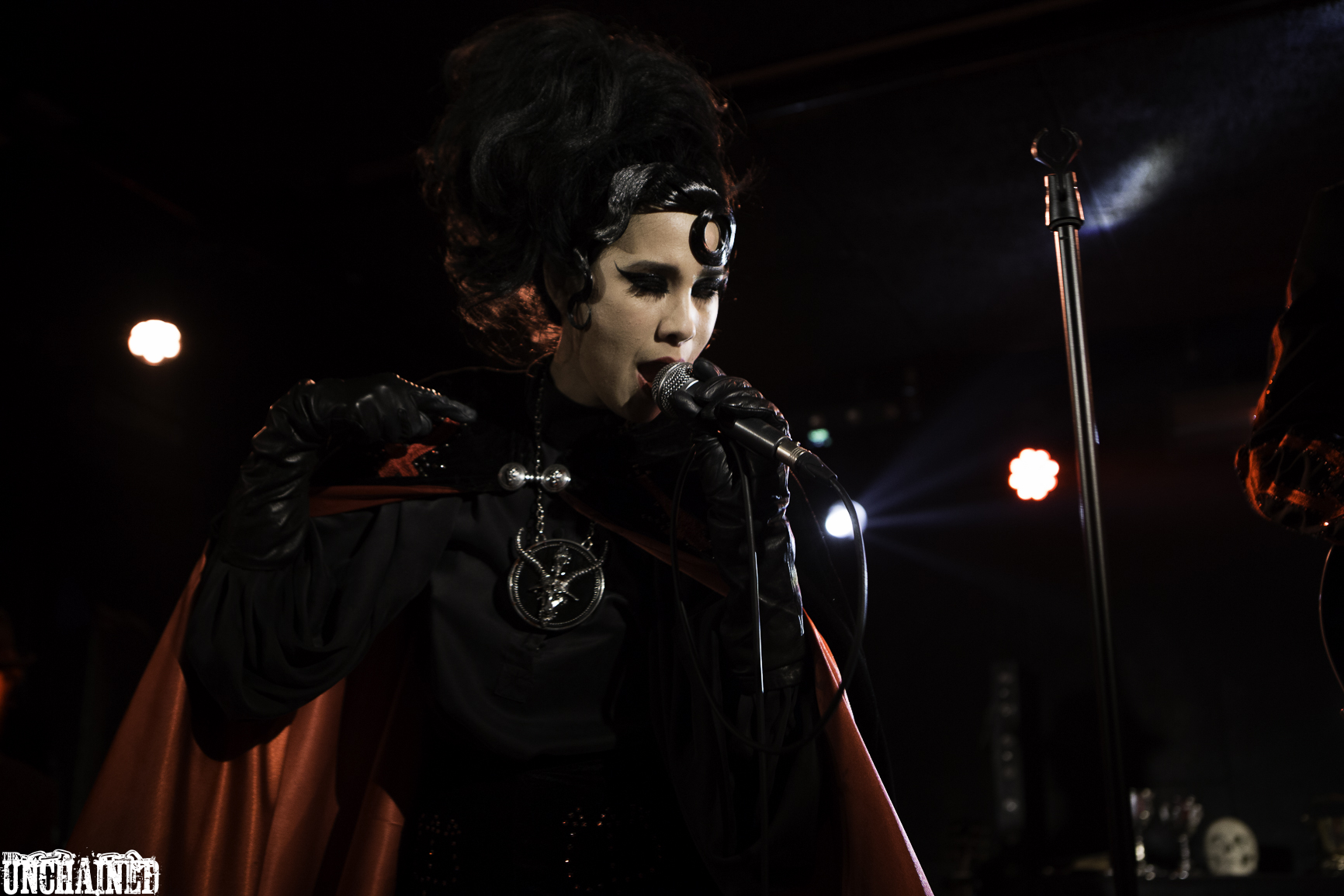 Zachary : Well we designed them
Alexandra : This was a very long project to design…
Zachary : …3 months !
Alexandra : Sounds crazy but so many little thing to consider… at first, the lining was black on the cape, Then I had black clothes underneath, kinda like mush together, didn’t look good… but we found this guy named Jerry Atwood (1), he’s in Indiana, he’s keeping up real classical American chain stitch tradition alive and so… It’s important for us to support other artist…

Alexandra : Either by Black Broom (2), we did this these in collaboration with them, they are friends of our
Zachary : It’s different makers
Alexandra : We have these idea like “oh we have to have a Satanic Bull-o-tag !”, lot of time you see them with like a steer…
Zachary : …or kinda a cow skulk…
Alexandra : …so we decided to doing them back then !

Alexandra : it’s a very short tour, we basically came here to do road-burn, and we expect to come back !
Zachary : We’ll be back soon !
Alexandra : We hope so !

(Someone knock on the door and enters then leave and close the door. Zachary says “Bonjour”. Alexandra says “Au Revoir !”. Everyone laugh !) 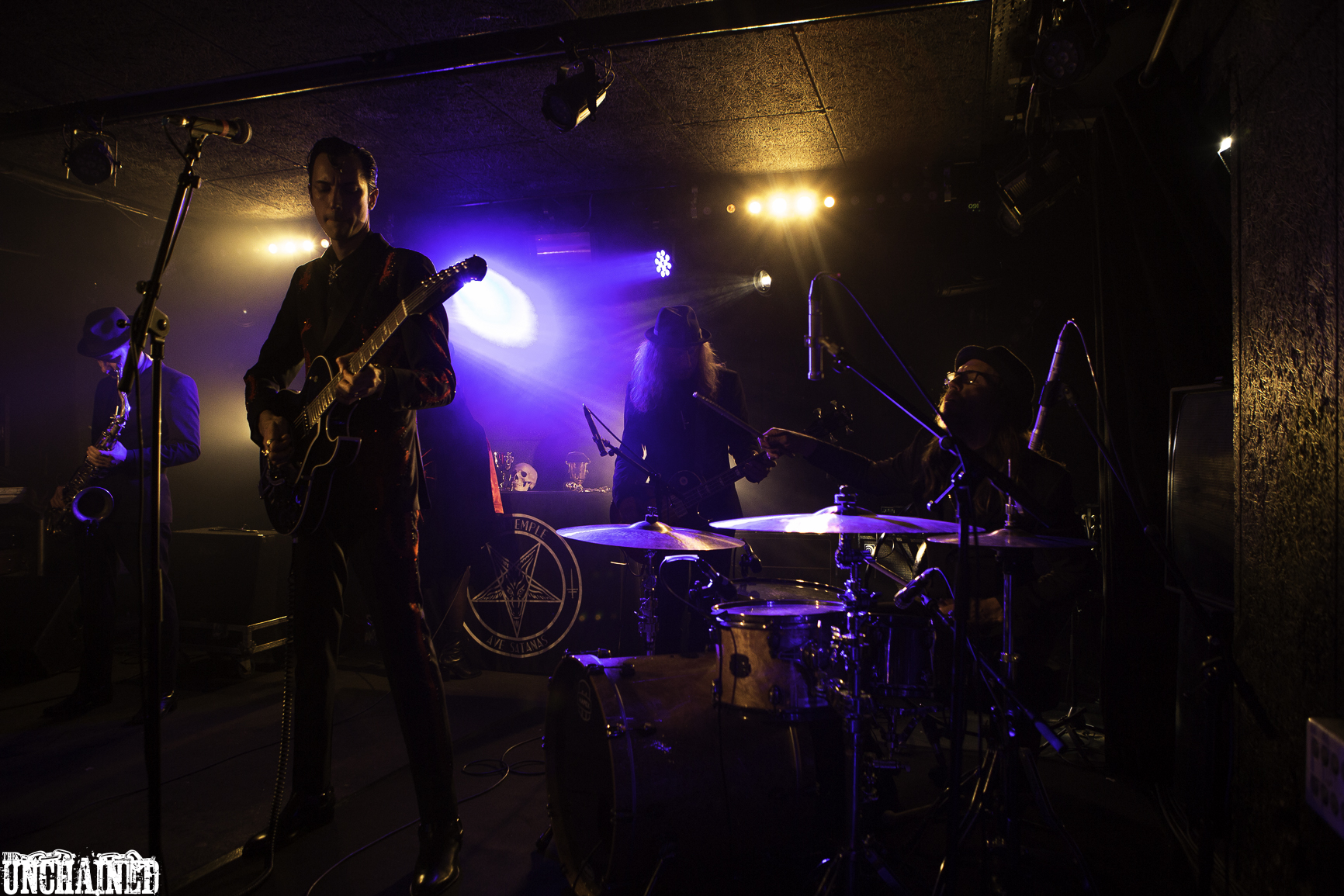 Alexandra : All the food is so good, all of the beautiful art, so romantic… we were having dinner the other night, holding hands, and the waiter brought our food, we stopped holding hands and he goes “I’m sooo sorry to make you stops holding hands !!!”

Alexandra : Yeah it feels that way… we saw people making out in street corner… so French ! Exactly what we would think like smoking cigarettes and thinking… It’s cool here !

Live-report and other photos of the show can be seen here :

Thanks to Base Production the concert invitation and the interview proposal.